Crong is the younger brother of Pororo as well as being one of the main characters of Pororo the Little Penguin.

Crong is the parallel protagonist of the series and the parallel male lead. He is a little spinosaurus that lives with Pororo. Crong is the youngest of the group. He is usually with Pororo and is constantly getting into trouble. In Season 1, he does not speak; he can only say his own name ("Crong") to communicate, but he is seen speaking in a time from the second season. In Seasons 3-NEW2, he wears a light blue aviator jumpsuit, red bandana, and matching gloves. In the sing-along series, he likes playing the trumpet (Season 1 and 2, as well as the HD remakes) and electric bass (Season 3 only). He has a crush on Loopy and a tiny bit on Petty.

Crong almost always says only "Crong, Crong", rendering nearly all of his speech unintelligible to the viewer, though the rest of the characters seem to understand him perfectly well and often repeat the meaning so that the audience can comprehend it perfectly. However, he does occasionally say a few other words, such as the names of other characters.

Crong is a young spinosaurus who was hatched from an egg Pororo found in the forest in We're friends! (We Are Friends in the HD version). Starting from the 3rd season onward, he wears a blue jumpsuit and a red bandana and gloves.

In "We're friends!", Pororo once found him hatched from an egg, and thought he was harmful, but he knew that after he adopted him as a foster brother, he wasn't as harmful, and the two became great friends as well as brothers, although they bicker a lot.It was revealed he was a troublemaker. Once he was kicked out of the house by Pororo. Pororo felt bad about him and found him.

He begins to wear a blue jumpsuit and red bandana and gloves from this season onwards. 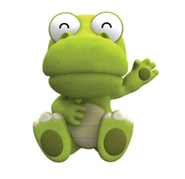 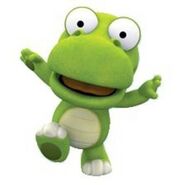 Crong about to close the window.

Add a photo to this gallery
Retrieved from "https://pororo.fandom.com/wiki/Crong?oldid=13688"
Community content is available under CC-BY-SA unless otherwise noted.