Popo is a blue alien who was first introduced in Popo and Pipi, alongside his sister Pipi.

Popo is a blue tripod alien with a yellow face, and five yellow limbs below his body, which can be used for arms and legs.

In "Popo and Pipi", he first appears with his sister Pipi when Pororo's plane crashed into their U.F.O.

Him and Pipi are the replacements of the Aliens in the series. 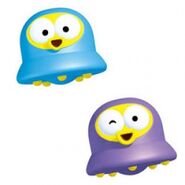 Add a photo to this gallery
Retrieved from "https://pororo.fandom.com/wiki/Popo?oldid=13255"
Community content is available under CC-BY-SA unless otherwise noted.